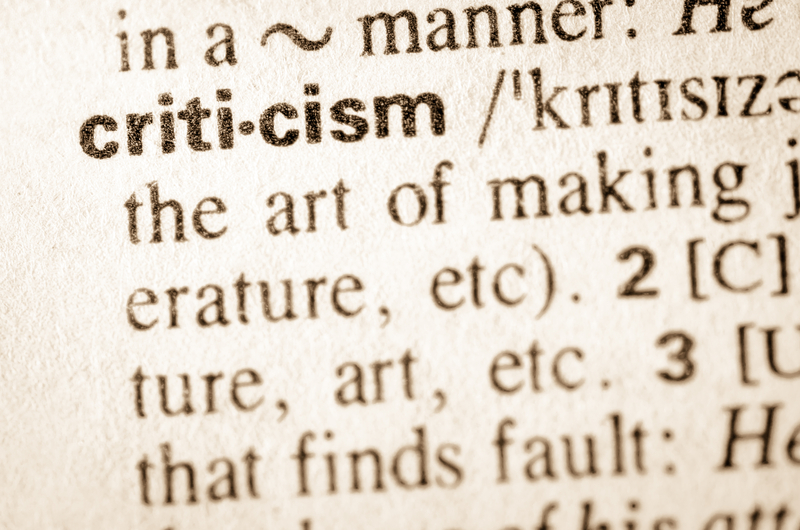 As children, when we heard the word criticism, our hearts stopped, our stomachs churned and we likely thought, “I’m not good enough.”  The word criticism has taken on very negative connotations and it doesn’t have to be that way.

I often hear that receiving criticism is one of the most difficult and uncomfortable communication situations facing us at work and at home. Yet our ability to view criticism productively is a key to successful leadership, management, and overall relationship development. How we deal with critical comments often determines how we feel about our bosses, our peers and our direct reports as well as our family and friends. It also says a lot about how we feel about ourselves.

The ability to receive criticism and profit is very important if you want to learn and grow, both personally and professionally. The ability to give criticism in a positive, productive manner is equally important. Remember, when communicating, it takes two and it starts with you. How YOU give and how YOU receive will impact how beneficial the criticism will be.

Recently, a client who is very open to constructive feedback was telling me how her new boss had no idea how his constant critique of her work (as well as the work of her team) was impacting the morale throughout the organization. He was like a bull in a china shop knocking down everything in his path; projects they had worked on for months had been well-received by leadership before but were now being denigrated. This new boss was marking his territory at the expense of creativity and collaboration. My client knows the appropriate way to give and receive criticism so she chose to do her best to “develop thicker skin” and use it as a reminder of what not to do.

When you are the sender of criticism whether it be in a performance review, a project review or just in passing, be sure to be alone with the receiver. Berating someone in a meeting shows a definite lack of EQ (emotional intelligence). Avoid the following which are examples of destructive criticism:

When you are receiving criticism, do your best to KEEP AN OPEN MIND. Remind yourself this is an opportunity for you to learn something even if the person is rude and demeaning (you may learn you don’t want to work for or with him/her anymore if it persists). Know that the sender may lack emotional intelligence and not know how to deliver it in an appropriate manner. Avoid these destructive responses:

Instead, choose to profit from the experience using it as a catalyst for personal and professional development. Criticism can be a chance to make choices rather than to accede to demands. You always have choices. No one can make you change; it’s your choice. Think of it as a source of new data and evaluate it objectively. Take whatever steps are necessary to put behavioral changes into action. If a negative situation like described above with my client continues and you find yourself in an abusive situation, it might be time to dust off the resume and start looking for new job opportunities.